http://www.discogs.com/sell/item/222133380
https://casusbellimusica.bandcamp.com/
Includes digital pre-order of Global electrification. You get 1 track now (streaming via the free Bandcamp app and also available as a high-quality download in MP3, FLAC and more), plus the complete album the moment it’s released.
shipping out on or around 15 March 2015
Pre-order Now €11.90 EUR or more
Send as Gift
1. in the darkness 07:28
2. insight
3. Birth project
4. Beginning of great work
5. Food riots
6. Insignificance against the big plan
7. Finale Empire
about
Released by Electrica Caelestis / Casus Belli Musica on 15th of March, 2015. Cat. # ELECTRICA 006 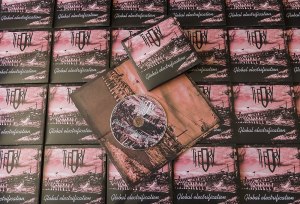 Antoine Graftio: The album is dedicated to the outstanding Russian engineer and my cousin Genrikh Osipovich Graftio.

Genrikh Osipovich Graftio (Russian: Гéнрих Óсипович Грáфтио, December 26, 1869, Dvinsk — April 30, 1949, Leningrad) was a Russian engineer considered to be a pioneer of the hydroelectric station construction in the Soviet Union, as one of the founders of the GOELRO plan, and famous for the construction of the first hydroelectric stations in the Soviet Union, the Volkhov Hydroelectric Station in Volkhov and the Lower Svir Hydroelectric Station in Svirstroy. Genrikh Graftio graduated from the Imperial Novorossiysk University in Odessa in 1892 and the Petersburg Institute of Transport Engineering in 1896, where he had been teaching since 1907. In 1921, he was appointed a professor at this university. Between 1896 and 1900, he was an intern in Europe and USA, studying the power equipment.
In 1900, Graftio created the first project of the electrified railway in Russia, which was never realized. In 1906, he was charged with developing an electric tram network in Saint Petersburg (at that time the capital of the Russian Empire), which was opened in 1907. Since 1905, he was involved in the project design of hydroelectric stations. In 1905, he designed a project of a power plant on the Vuoksi River (never realized), and in 1910-1911 Graftio designed the power plant on the Volkhov River, which was realized only in 1927.
Between 1918 and 1920 Graftio was the first deputy of the chief construction engineer of the Volkhov Hydroelectric Station, the first hydroelectric station to be built according to the plan. In February 1920, Graftio was included into the committee charged to draft the GOELRO plan, the program to provide sufficient electric power required for future industrialization of Russia and, eventually, the Soviet Union. In the committee, he was responsible for the sections dealing with transportation and with the electrification of the Caucasus areas. The plan was drafted in December 1920. Since early 1921, he had been a chief construction engineer until the construction finishing in 1927. On March 21, 1921, he was arrested on the charges of counterrevolutionary activity, but was released after several months due to intervention of Gleb Krzhizhanovsky, who needed Graftio to continue working on the construction. After 1927, he was the chief engineer of the construction of the Svir Hydroelectric Station, opened in 1933.
In 1932, Graftio was elected a member of the USSR Academy of Sciences.
Between 1938 and 1945, Graftio was the Chief Inspector of the Ministry of Energy, responsible for the power plant construction. In particular, he was responsible for the program of the restoration of the stations destroyed during World War II. He died in 1949 in Leningrad.
credits
releases 15 March 2015

Music and artwork by Antoine Graftio